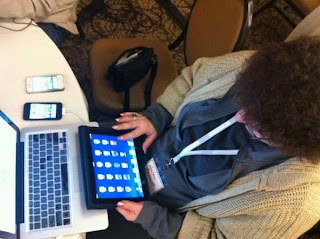 I attended my second ITSC conference, sponsored by OETC. It was a hands-on conference, and this picture, taken by my friend and colleague Jackie Gerstein, shows the four devices I was using in a workshop put on by Hall Davidson on Making Mobile Meaningful (with my Macbook Pro, my iPad, my iPod Touch, and my iPhone). We explored lots of Web 2.0 tools that could be accessed with a mobile phone, including Polleverywhere.com. I learned that you can email videos directly to a YouTube account through a special email address found in Mobile setup; the same process can also be done within Flickr for pictures taken with a mobile phone.

I learned a lot about QR Codes, and picked my favorite QR code reader for my iPhone (i-nigma or ScanLife). I also picked two websites to generate QR Codes: http://qrcode.kaywa.com/ and http://goo.gl (which will also produce a shorter URL). One website that seems intriguing provides an audio clip to accompany the QR Code: http://qrvoice.net/ I plan to incorporate QR Codes with my poster session at ISTE, including some voice recordings! Hall showed a living book that was a series of QR Codes linked to a series of dynamic websites. I am going to try to incorporate QR codes in my book, as well (which is at the editor!).
Posted by eportfolios at 3:48 PM No comments:

Yesterday I did a webinar for a MoodleMeet on ePortfolios sponsored by LearnNowBC. Here is the link to the Elluminate recording. Here are the slides that are created based on my new poster for the 2012 ISTE conference:

View more PowerPoint from Helen Barrett
I took my new poster and turned it into a presentation. I am currently exploring the concept of Double Loop Learning in ePortfolios (see my Reflection4Learning Google Site page for more details). Is that level of reflective learning for teachers only, or do we want students to reflect at the level of assumptions, values and mental models?
Posted by eportfolios at 3:23 PM No comments:

I got the word last night: my trip to Vietnam has been approved by the U.S. State Department's English Language Specialists program. I will be there in April, helping faculty and students use technology to demonstrate acquisition of English language skills. I will start out at the university in Dalat, and then will probably work with ELL programs in Ho Chi Mihn City (Saigon) and Hanoi. This will be a new adventure! I know I will learn as much from them as they will from me!

I have already started a Google Site to provide both a framework for an ePortfolio (based on a Google Site Template that was published by City University of Hong Kong) and some strategies for using technology to document receptive skills (reading and listening) as well as expressive skills (writing and speaking). I will be building this site further over the next two months before I leave on this trip.
Posted by eportfolios at 4:07 PM No comments:

Yesterday, I read the following newsletter article from Faculty Focus: Student Self-Assessment: A Sample Assignment.  The first assignment is a Personal Goals Statement; the last assignment: What Have You Learned from the Class? These are great prompts for learning portfolio/journal entries. This quote from the article illustrates some "portfolio-like" practices:


The real value of the assignment is the final paper where students return to their goals and assess how well they reached them. You could prompt students to provide examples illustrating how their goals were achieved. If a goal hasn’t been reached, there needs to be a discussion of why.

These assignments were targeted at college students, but they also work with elementary school students, as documented in Rob VanNood's blog on using Evernote with his 3rd-5th graders at Trillium Charter School in Portland. Rob has prior experience using ePearl, which was based on a model of Self-Regulated Learning. (See Zimmerman's 1990 PDF paper, Self-regulated learning and academic achievement: An overview. Educational Psychologist, 25, 3-17.) This diagram was the foundation for my poster developed on Monday and previous blog entries.
Posted by eportfolios at 1:00 AM No comments:

I just finished my first virtual office hours for my online class using Google+ Hangouts. I set up a private circle just for the class, and invited my students to add me to one of their circles, whereupon I added them to the private class circle. I posted the schedule in the circle discussion and simply clicked on the hangout button at the bottom of the message. When they log in to Google+, they should see that I am online:
Pretty cool way to be available to students!

Posted by eportfolios at 12:00 AM No comments:

How does culture impact on ePortfolio development? I have met with groups that question whether the focus on reflection in ePortfolios is a northern European/Australian/NewZealand/American form of self-disclosure that is very uncomfortable in other cultures, such as southern European, Asian, etc. Over ten years ago, when I was in Singapore, we talked about the difficulty many in Asian cultures have with public disclosure and reflection. (I wonder, has the emergence of social networking changed that attitude?)

When I was presenting at a university in the Midwest last fall, an anthropology professor pointed out the American/Euro-centric nature of my discussion of reflection. Last week, I worked with the Languages faculty at my former university, where we discussed the difficulties of students from some cultures to focus on self rather than groups (family, community) or to point out their own strengths and achievements. I am preparing for a possible trip to Vietnam, where I will be doing workshops on ePortfolios in English Language Learning.  I have a lot to learn about the impact of a person's culture on the implementation of the portfolio process. Are there cultural implications of reflection in ePortfolios that I need to be sensitive to, similar to the developmental dimensions?

I was interested in Darren Cambridge's tweet last weekend from the AAC&U ePortfolio meeting: "[the speaker] makes the classic mistake of thinking an eportfolio is a collection not a synthesis." In my previous blog post, I added some references to Bloom's Taxonomy within the context of ePortfolio development. In the revised taxonomy, where the concepts changed from nouns to verbs, the authors removed synthesis but added create. I added these components to a diagram that I am using to illustrate the development of ePortfolios with 1-to-1 mobile devices, but included both synthesize and create.

Posted by eportfolios at 3:45 PM No comments: