Today Google Docs updated the Documents list, with some neat new features. I really like the way they have changed the Folders into Collections, which really act like Tags for classifying docs, combining the best features of labels and folders. In a portfolio collection, any file can be uploaded and assigned to more than one Collection (i.e., subject collection, portfolio collection, etc.). The new name fits better within the portfolio process. Bravo, Google!
Posted by eportfolios at 11:12 PM No comments:

I am at the AAC&U E-Portfolio Forum, and the attendees were asked to choose a form to reflect on the activities of the day: a Digication Portfolio page, Facebook, Twitter tag #aacu11gki Google Voice, Google Docs. I chose Twitter, but am also checking FB. Of course, this type of backchannel conversation happens at most technology conferences I have attended over the last two years. What makes this different is the prompt provided to the participants:

ASK YOURSELF: Why am I here today? What am I curious about? What do I want to know or learn from today's for? What did I take away from [today's] activities?
"I am here to..."

RETRIEVE YOUR EXPERIENCE: What is capturing my attention right now? What is challenging, exciting and/or annoying to me and why? With whom do I want to share my insights or materials at home?
"I notice that I..."

RECORD YOUR INSIGHTS: How am I sharing my insights with others? What am I doing to record my experiences? What resources might I need?
"That session made me think about..."

ANCHOR & AMPLIFY: How do the insights I am having today apply to the rest of my work and life? What will I perceive, think and do differently as a result of today's sessions?
"Based upon what I've learned today, I think I will..."

Sent from my iPhone
Posted by eportfolios at 1:49 PM No comments: 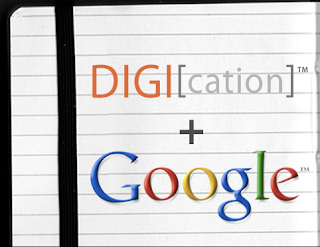 Google Apps just got smarter: introducing the Apps Marketplace’s new EDU category
A notable addition to the list: Digication for e-portfolios with unlimited free accounts for all students (with limited storage, but hey, you have GoogleDocs and hyperlinks)! http://digication.com/google

This is a very exciting development. The combination of GoogleDocs/Sites for collection/integration of technology into the curriculum, Blogger for day-to-day reflection/documentation of learning, and now Digication for presentaton/reflection/showcase makes GoogleApps Education Edition the strongest platform for K-12 schools to implement e-portfolios.

This development provides an opportunity to implement e-portfolios for all students, within a rich pedagogical environment, in addition to the other tools available: BrainPop, Aviary, DreamBox, Haiku, LearnBoost. I am excited to add this new chapter to my book!
Posted by eportfolios at 11:54 PM No comments: 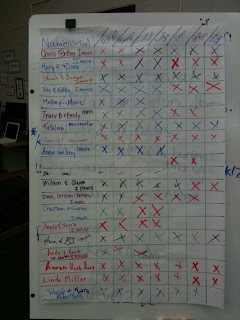 Erin and I just finished a two-day workshop on eportfolios with a school district near Minot, ND. The teachers focused on building a collection of artifacts in GoogleDocs yesterday morning, built a professional portfolio in the afternoon in Google Sites. This morning, they created a digital story and uploaded it to GoogleDocs, shared it with me so that I could show it to the whole group. This was by far the easiest end to a digital storytelling workshop, when we collect stories to showcase. No more flash drives to pass around! Just send a link.

For more than half of the teachers, this was the first video they had created, although many of them worked with a partner. This afternoon, we had them collaboratively writing in grade level groups using typewith.me, pulling together a plan for Next Steps in implementing e-portfolios in their district. Altogether, a very successful two days! As you can see by the progress chart, we had a lot of video projects to support! Our largest group yet. I learned some more about iMovie9 in the process!

On my way home, I read a tweet with link to the latest draft publication from the Ministry of Education in New Zealand: Digital portfolios Guidelines for beginners (PDF). Looks like a good study and set of resources on some of the early adopter schools, including Pt. England and Bucklands Beach Intermediate. We need a similar study here in the U.S.! They asked these schools some good questions.
Posted by eportfolios at 2:07 PM No comments:

I have been confirmed as the luncheon keynote speaker at the AAEEBL Western Conference on ePortfolios at Westminster College in Salt Lake City, February 28-March 1, 2011. The title of my presentation will be: Is the Future of ePortfolios in your Pocket? mPortfolios for Lifelong Learning. My description:


"We are implementing portfolio-like processes throughout our lives, regardless of technology or tools:
Look at the way that technology supports those processes: digitizing/archiving, hyper-linking/embedding, storytelling, collaborating, publishing, aggregating. We need to help students develop lifelong skills that will last after they graduate. If students are using "world ware" (tools in use it the world) then they are developing skills that can be applied in the "real world" outside of formal education. We should also look at how students are naturally using technology in their lives: social networking, mobile communications, capturing and storing images, audio and video, etc. We could build on the tools that students are already using... and look at the intrinsic motivation factors that drive the use of social networking, and apply those factors to the ePortfolio environment: autonomy, mastery and purpose (thanks to Dan Pink's book, Drive). We are looking at a future that is well integrated with mobile devices. I will share my current research focusing on the application of mobile devices (iOS and Android) to support ePortfolio development across the lifespan."

See my latest Google site, under development: http://sites.google.com/site/mportfolios/
Posted by eportfolios at 8:48 PM No comments:

I received a Russian translated version of my Balancing the Two Faces of Electronic Portfolios diagram. This addition makes fives different translations: Spanish, Catalan, Japanese, Mandarin, and now Russian. As this EFL Instructor fron Volgograd State University said, when she sent me the image,


Your works have helped me greatly and I translated the table about two sides of e-portfolio into Russian during my work. It is one of our main fields of work to localize foreign literature for Russian public and vice versa. As I saw some foreign versions of your table in the online publication of the article such as Mandarin and Spanish I thought probably it will be a good idea to place the Russian version as well. So to express my gratitude I decided to send you the result of my work and hope it may become as useful for you as your works have become to me.

Thanks! These translated versions provide visual representations of how this concept has been accepted across the world!

UPDATE 1/26/11: I received the following message today: "attached I send you the German translation of your slide that is very helpfull for understanding the idea of eportfolios." This version is also included after the others on the web page.
Posted by eportfolios at 3:39 PM No comments:

Today, Google make the following announcement: Google Docs Now Allows Streaming of Uploaded Videos. The following are the formats that can be uploaded into Google Docs:
Here is a Aimee's first Lucy video, which I uploaded to GoogleDocs. This is really good news for schools that block YouTube. Now we can have student-created videos uploaded to GoogleDocs. While these videos open in a new window, rather than being embedded on a page, maybe that will happen soon.
Posted by eportfolios at 11:59 PM No comments:

My junior-high granddaughter and I are experimenting with my iPod Touch 4, creating a digital story with images she took with the built-in camera. She wrote out a short script, and I helped her format it to help with recording (one line per image). She taught me a lot about the capability of the device, including the built-in microphone, which she discovered when she tried Face Time last weekend. Our first project was using Splice, which tended to quit on us when we inserted almost every new image. However, we didn't lose much. We also had a difficult time figuring out how to go back and adjust the timing of the audio clips we recorded directly into the program. It was easy to adjust the In and Out points of each audio clip.  I'm sure with a little practice, and more time, we could add a lot more features, like the Ken Burns effect on the images, and background music. Our first version was uploaded to my YouTube account directly from the program. I downloaded a Quicktime version to my MobileMe account.

The second version of Aimee's video was created using Storyrobe on the iPod Touch 4. Maybe it was because it was the second time she narrated the story, but it took only a few minutes to create this version. Aimee watched the YouTube version of the first story, so that she picked the right images, and then figured out how to record as she navigated from image to image. When she was through, she said it was much easier. The little glitch in the audio at the end was probably because she stopped the recording while she was still talking! The end result was 30 seconds shorter, with no titles. We figured there were graphics programs we could use to make titles, and do a screen grab. Storyrobe looks like a good program for elementary students. The process reminds me of PhotoStory, without the music. I uploaded five copies of the story to YouTube (by accident, because there was little feedback when I pressed the button), but YouTube rejected the duplicates.

I have more programs that I would like to try, but school starts again tomorrow. I will focus on using other video editing software on my iPad (ReelDirector or Storyrobe) to recreate one of my digital storytelling workshop videos. Stay tuned!
Posted by eportfolios at 10:56 PM 3 comments: